A brain MRI study in a cohort of 2,000 Bordeaux university students

What is the MRi-Share project? MRi-Share is the neuroimaging component of the i-Share (Internet-based Students HeAlth Research Enterprise) an epidemiological study coordinated by Professor Christophe Tzourio that aims to determine the health status of students in France. MRi-Share that is led by Professor  Bernard Mazoyer has three main objectives. The first is to study the structural and functional changes of the brain in the age group 18-35 years, and to identify its determinants (genetic, familial, lifestyle, antecedents, etc.) which has never been done. For example, does specialization in the choice of studies (law, literature, science, etc.) lead to structural or functional differences in students with different training curricula? The second objective is to detect in students’ MRIs the presence of markers of the pathologies affecting them, and for some early markers of aging-related diseases such as Alzheimer’s disease and to investigate whether some of the determinants of the diseases are common to young and elderly subject. This research project, which combines the MRI of each subject with genotyping of its DNA, is led by Professor Stéphanie Debette (INSERM, VINTAGE team of the Bordeaux Population Health Center) who has obtained an ERC-Starting grant. Finally MRi-Share’s third objective is to become an MRI data platform for the international biomedical research.

How is an MRi-Share study done?

The participants, who are already registered in the i-Share study, are recruited on a voluntary basis. They give their consent and receive a financial compensation for having an MRI scan of their brain to be carried out on a Siemens Prisma 3-Tesla imager of the latest generation. The acquisition of this MRI scanner was partially funded by the i-Share study and is dedicated to 80% MRi-Share acquisitions for about 2 years. The MRI scan lasts approximately 45 minutes and involves the acquisition of several types of MRI images (see illustration) : T1 and FLAIR 3D sequences and a diffusion multishell sequence for the study of cerebral tissue morphology and microstructure, a susceptibility-weighted sequence for identifying possible micro-bleeding, and a 15 min long fMRI-BOLD sequence when the subject is at rest for studying his brain intrinsic connectivity. The MRI examination is consolidated by some psychometric testing. 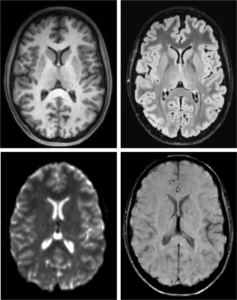 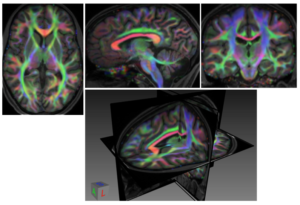 3D organization of the white matter fiber bundles derived from the analysis of the diffusion-weighted images of an MRi-Share participant. The figure gives the orientation of the fibers passing through 3 orthogonal planes. The color indicates the main direction of the fibers: from left to right (red), from front to back (green), and from top to bottom (blue). Composite colors correspond to oblique directions.

Afterwards, the acquired data are transferred to the GIN-IMN computer systems and analyzed in detail thanks to the ABACI software suite we designed in the laboratory. On a daily basis, we carry out a quality control immediately after the acquisition to check that everything is going well on the machine and the images. At this stage, an abnormality which may present a risk to the health of the participant is (rarely) detected, which makes it possible to shortly refer the participant to a specialist who can thus take charge without delay and at an early stage.

What will the MRi-Share database mean in the long term?

The final sample will consist of 2,000 students, the 2,000 limit being a budget constraint, but this number already represents a large sample size compared to what is usually done in imaging, especially given the homogeneity of this sample. The MRi-Share database will first include the raw image data after a procedure has made it impossible to recognize the participant’s face. It will also contain for each individual a whole set of cerebral maps resulting from the treatment process: density of gray matter and white matter, thickness, curvature and surface of the cortex, maps of the microstructure of the substance and presence of possible anomalies, distribution of bundles of white fibers, maps of intrinsic brain activity networks. Average maps of all these parameters will also be available as well as the distribution in the sample of global or regional parameters.